Rising from the ashes of WWII damaged Plymouth, the city’s market is more than just a place to shop. It represents a symbol of the naval city’s survival and regeneration after the destruction caused by relentless wartime bombing.

Today’s Plymouth Market is housed in a tall, reinforced concrete building which was completed in 1959 and designed by local architects, Walls and Pearn. It was built in the west end of Plymouth to support trade in that area and replaced the original city market, which was destroyed in the Blitz of 1941. Throughout the war, stallholders continued to trade in a series of temporary iron structures, so that the market’s permanent rebuilding is truly an emblem of Plymouth’s survival and regeneration.

Because of its heritage, the current market facility is a Grade II listed building and included on the Statutory List of Buildings of Special Architectural and Historical Interest.

In addition to its history, the building is noteworthy because of its height and distinctive vaulted roof design. The main roofing area is comprised of a curved shell formation, which added to the challenges of re-roofing.

SIG Design & Technology became involved when the market, which is operated by Plymouth City Council, required substantial repairs to its roof membrane. As well as this work, which was completed between October 2016 and August 2017, principal contractors Ryearch Limited – a construction and civil engineering company – also carried out internal refurbishment works above the stalls area within the market.

Over the years, the roof had deteriorated, with leaks springing up and holes emerging in the gutters, as well as problems surfacing with heavy leaks from the market’s windows. Deposits of seagull guano had also built up across the roof area, with its acidic content corroding the membrane.

For the project managers, an important criterion was finding a roofing solution, so things could be “business as usual” and the small traders who are the backbone of the market would be able to continue selling their produce to customers there.

Initial thoughts involved stripping off the original roof membrane by mechanical means. However, closer investigations raised concerns that this would generate excessive stress and vibration that could damage the roof shell.

Step forward roofing contractors Clegg & Shortman, a accredited Hydrostop AH+ contractor, with the ideal solution for this important heritage building. The Hydrostop AH+ liquid waterproofing system proved to be more than a match for this challenging project.

Hydrostop AH+ is a one component product which offers significant advantages over conventional PU and PMMA systems and has a warranty for up to 25 years. Very low in odour and fast-curing, it is fully reinforced with a polyester fabric. It can be applied under practically any conditions – even as low as 0oC such as during the winter months when the Plymouth Market refurbishment was underway. Hydrostop AH+ is ideal for small scale or large commercial projects, whether they are new or refurbishments.

The roofing team had to deal with difficult access due to the elevation of the building and steep slopes of the roofing shell waves – which were in complete contrast to typical flat roofing projects where they had previously applied the product.

Hydrostop AH+ presents no COSHH or disposal issues and since the liquid is non-solvent based, it is very low in odour. Importantly, this meant no impact on the market’s business and trading operation including several cafés within the market remained uninterrupted.

Although initially daunted by the size of the curved roofing area, the roofing contractors soon grasped the challenge. 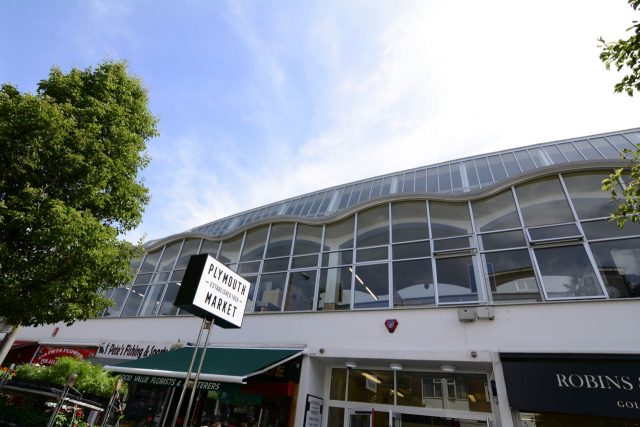 “When I first went up onto the roof to see the scale of it, it looked immense,” said Rob Lazarus, Contracts Manager at Clegg & Shortman. “And every time I went up subsequently, the roof looked bigger.”

However, with its paint-on system, Hydrostop AH+ proved to be “a very good product” for the repair of the wave form main roof, as well as being used in tackling repairs to two smaller canopy roofs at the market.

“It was the perfect product for the job…and so easy to use,” added Rob.

Due to the building’s listed status, Historic England supervised and approved the refurbishment.
SIG asked the Hydrostop AH+ manufacturers to create a colour – Weathered Silver – specifically for the market roof membrane repair, in keeping with Historic England’s requirements.

“Our client Plymouth City Council were very pleased with the finished results of the work. We had also put forward a cheaper product (than originally had been proposed) which provided them with a cost saving.”