The Archdiocese of Birmingham

Celebrated architect Richard Gilbert Scott, who passed away in July 2017 represented the fourth generation of England’s greatest architectural dynasty. He was well known for his ecclesiastical designs with three of his churches having attracted Grade II listed status.

One of these is Our Lady Help of Christians Catholic Church in Birmingham, which is among his most famous designs and a noteworthy example of 1960’s ‘Brutalist’ architectural design.

Along with its distinctive obelisk roof, which has an existing copper membrane finish, other features of the Our Lady Help of Christians Church include its striking concrete building envelope. The project was among the late Mr Gilbert Scott’s favourites as it represents his breakaway project from his practice.

The architect’s design for the church is described by the Twentieth Century Society as “a subtly polygonal T-shaped plan (which) allowed a forward altar surrounded by seating”.

The description on the society’s website continues to say: “Above this, the roof is partly formed by extraordinary curved serrated ribbed trusses of reinforced concrete faced externally in copper bonded bitumen membrane – a dramatic, theatrical treatment which suggests both a delight in expressive, sculptural forms and a desire to continue with the modern Gothic spirit.”

However, despite the previous resurfacing of its copper roof in 2000, the structure of this renowned church had deteriorated in recent years and reached the end of its useful working design life.

Now, approximately 50 years after the original congregation first took their seats to worship at Our Lady Help of Christians, a project to sympathetically restore the roofing membrane to resemble its original glory has been completed.

Project leaders, APEC Architects, conducted extensive research on the church’s original roofing and detailing, which included a visit to the RIBA Archives at the Victoria & Albert Museum to determine the most appropriate restoration approach.

APEC specified a new covering for ‘Our Lady’ that will achieve a longer design life to better protect the fabric of the building.

James Phillips, Director and Chartered Architect at APEC, commented: “The biggest challenge we faced was finding a material to re-roof the building with, as the original covering (a copper foil faced bitumen sheet) is no longer manufactured.

“The existing roof presented a number of challenges; it curves in two directions and goes from flat to vertical, meaning the use of sheet metals would not work. Its location (near the end of Birmingham Airport’s runway) meant that the roof was subject to deterioration from aviation fuel, and the shape of the roof created strong uplift forces on its covering. The existing bitumen covering had also bonded with the concrete below, making it impossible to remove without damaging the concrete.”

With the in-depth product knowledge of suitable conservation methods for listed buildings, SIG Design & Technology played a vital role in the material choice.

Due to the church’s architectural status, Historic England took an interest in the restoration and specified that the roofing finish should match the colour and texture of the original copper membrane of the 1960s in appearance.

After establishing the client brief, SIG D&T concluded that a liquid solution was the best answer. The specification manager at SIG Design & Technology, was closely involved in leading the project for SIG.

Liquid waterproofing system Repoma®, exclusively supplied by SIG in the UK, proved to be the optimum choice for this high-profile project.

There were two prerequisites to the choice of membrane; identical colour matching to the original finish and longevity through the choice of a long lasting, resilient liquid waterproofing.

To recreate the tint of the copper roof at its 1968 peak appearance, a number of colour options were tried, and SIG consulted a painting of the church which is believed to have been created by a parishioner at ‘Our Lady’.

The perfect colour match was achieved by providing Repoma’s manufacturer with an original colour sample. A spectrometer determined the precise pigment ratio required and the top-coat was supplied mixed ready for application.

With its unique “PUMA” technology, Repoma combines the ﬂexibility and crack bridging qualities of PU liquids and the key renovation beneﬁts of MMA resins. Well suited for the repair of roofs, Repoma can waterproof almost any roof surface without removal. The membrane and fabric combine to oﬀer a highlyflow text elastomeric system which lasts for up to 30 years, even at -30°C or at very high temperatures.

Cold applied, Repoma can adhere to any form of detailing and requires no priming. It is very fast curing, dries in 30 minutes at 15°C and is ready for foot traﬃc in an hour. Its speed of application by hand supported the work of SIG Design & Technology’s accredited roofing contractors, The Rio Group.

In preparation, the existing roof needed to be power washed, the copper system solvent wiped to remove all dirt and to provide a suitable key. Adhesion testing had been carried out to confirm compatibility of the existing roof and new Repoma System.

On an initial visit to the church in 2016, SIG Design & Technology’s specification manager noted that the original green roof patina of the church had turned brown due to the ‘heavy air’ environment in the locality.

The Kitts Green area is near to Birmingham International Airport which has a busy schedule of flights, along with being close to a very busy road network including two motorways, so nearby buildings are exposed to pollution.

As well as the ‘heavy’ atmosphere which leads to discoloration, this factor means the roof joints will become heavier, leading to an increased risk of water ingress due to the copper expanding and peeling, lifting up the roofing lap. 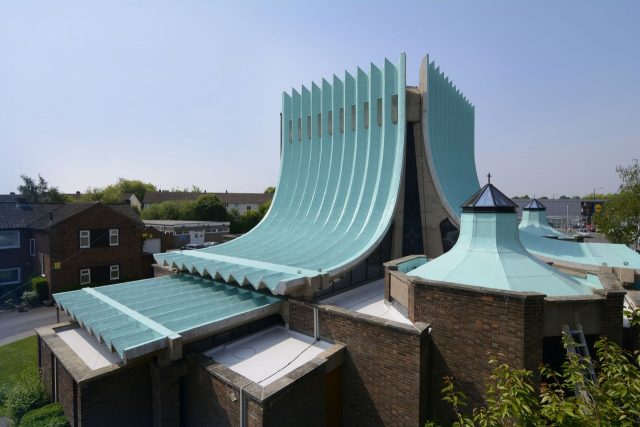 Due to the construction of the building envelope, a close assessment revealed that stripping away the original roofing membrane – or any part of the structure below 10mm in depth – the structure of this listed building might be affected. So, the roofing technical experts at SIG Design & Technology and manufacturer RPM had to work with the 50 plus-year-old original structure.

A copper-coated bituminous membrane employed in the original construction process had failed, leading to water ingress.

James Phillips at APEC Architects added:
“We received a great deal of assistance from SIG in reaching a solution that would be technically sound, as well as being suitable for prominent use on this Grade II* listed building. SIG assisted by carrying out extensive research on a number of products to ensure they would be suitable for use in this challenging context.

“This included the provision of a number of samples and on site tests to confirm adhesion and to satisfy the relevant authorities. The Repoma product that was chosen has been successful in meeting all of these challenges and has greatly enhanced the appearance of the church’s dramatic roof form.

“As a liquid product, it could be overlaid on the existing membrane, meaning that the pattern and texture of the original finish can still be appreciated, something that was critical to retaining the integrity of the original architect’s vision.”

SIG Design & Technology’s specification manager added: “As this is a conservation project for the Archdiocese of Birmingham, the emphasis was on making the building look like it would have done shortly after it was originally built. Creating a bespoke patina was important and required a lot of set-up and colour matching both in Belgium with our supplier RPM and SIG Design & Technology’s technical services and our site support team

“Restoring Richard Gilbert Scott’s church is a very prestigious conservation project and our work in creating the optimum patina colour match is something of a game-changer in delivering project support to the conservation architect.”