With its crenelated roofline and gothic windows, Stratford-upon-Avon’s Old Toll House is a distinctive landmark in Shakespeare’s birthplace.

However, the Grade I listed structure, located on the medieval Clopton Bridge and built in 1814, had fallen into serious disrepair over a 30 year period. This part of Stratford-upon-Avon’s heritage has been
included on Historic England’s Heritage at Risk buildings register.

Decay to the building had included the failure of the roof, which originally had a lead membrane, and the inner upper floor structures.

However, in 2016 a project with an overall value of £450,000 was agreed to rejuvenate this sandstone building. It was funded by a £232,400 National Lottery grant from the Heritage Lottery Fund (HLF) and grants from Historic England, the Architectural Heritage Fund, Stratford District Council and several
charitable trusts.

Repairs included the installation of a new roof and internal mezzanine floor, extensive repairs to the historic fabric of the building, two new staircases, plumbing and electrical installations and a new
water supply.

The restoration has preserved the historic building fabric and provided it with a new use as office space at ground floor and mezzanine level. In addition, the project has included a public display area in the basement and a range of activities exploring the history of the Toll House and Stratford’s wider industrial heritage.

With their knowledge of roofing solutions for conservation projects, SIG Design & Technology applied their expertise during the specification and installation of the tollhouse’s cold deck roof coating.

The Hydrostop AH+ Waterproofing System was applied to the flat roof. Hydrostop AH+ is an innovative one-component liquid waterproofing system which offers significant advantages over conventional systems. It can be applied under practically any conditions, including on cold days above 0˚C and on moist surfaces (7% or less).

In addition, Hydrostop AH+ emits no fumes and has very low odour, which meant buildings can continue in operation with business as usual while restoration work is underway – there is no need to close the premises.

Hydrostop AH+ is fast-curing and easy to apply. Its superior performance makes it ideal for any
small scale, large commercial, new build or refurbishment projects.

Hydrostop AH+ is based on alpha-hybrid, silane terminated polyether technology. Not only does it exceed most performance criteria of other liquid systems, including polyurethane and PMMA, it
also eliminates many of the disadvantages of these products.

The Hydrostop AH+ liquid roofing system is now even quicker to install. The system can be applied directly to the face of the specified insulation board and only requires the application of a 100mm wide self-adhesive jointing tape to the joints of the insulation, rather than having to apply an entire bitumen carrier membrane over the insulation as some other liquid systems do.

Due to the exposed surface, key criteria for the tollhouse roof included achieving a firmly adhered, free draining and weather tight membrane. Resistance to wind loads was another factor in the specification.

Andy Chamberlain, Contracts Manager at contractors Stone Edge, said: “The challenge of working on this building was a tight site compound, which is located in the grounds of a public house and adjacent to a major route into Stratford-upon-Avon.

“SIG Design & Technology designed the material for the roof to work with minimal falls for the gutters and a very shallow roof, which was rebuilt as the existing one was.”

The Hydrostop AH+ roofing system was chosen due to its suitability for the shallow roof and its guarantee of up to 25 years.

Hydrostop AH+ was used as an alternative to lead – traditionally used on buildings of this age – due to its ability to be used on a shallower pitch, and to avoid the risk of lead theft. 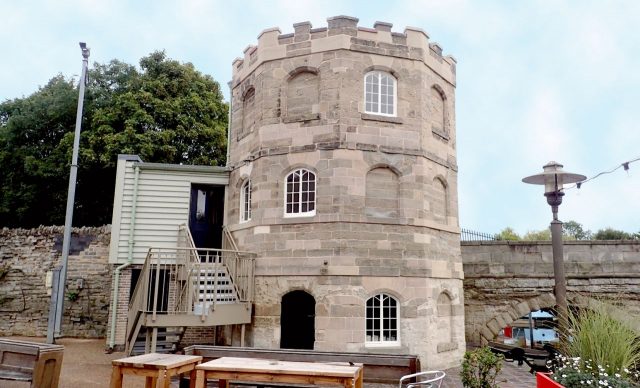 Kevin Bond, Stratford Historic Buildings Trust Chairman, said: “We are absolutely delighted with the quality of the restoration and refurbishment works which have transformed what was a neglected part of Stratford’s heritage.”

Following the restoration, the Old Toll House was officially reopened at a civic ceremony in September 2017.